1. Tell us about yourself. What have you been doing and what are you working on during this COVID-19 lock-in.

I am working on all sorts of things, but mainly I am working toward being ABD by the end of the summer while simultaneously being more present for my four year old daughter who does not fully understand why she is no longer at preschool with her friends.

I was also recently notified that I was selected as a Dem. National Convention District Delegate candidate on behalf of Elizabeth Warren. I spent much of this primary season canvassing for Warren in New Hampshire which is traditionally the first state in the U.S. to have its primary election. This means that if I am elected as an MA 7th district delegate I would represent Elizabeth Warren at the convention on August 17-20, 2020 in Milwaukee, Wisconsin.  I’m not a politician or public figure, I am not even a professionalized organizer, but I do believe that I represent many constituents in my district and their concerns. Like my doctoral research, I believe that embodied experience (feminists also call this “situated knowledges”) is of utmost importance in representation when we are talking about real life, every day issues people face. As a district delegate I plan to foreground issues that particularly affect marginalized communities. As a Warren delegate, I have the opportunity to help push a progressive platform, to change the Democratic party to fight for actual progressive values, and to make visible issues directly affecting the Latinx community in the U.S. and my district.

2. Which aspects of your work past and present might be particularly interesting for supporters of the Shiloh Project?

In 2016, three weeks after delivering my daughter, I finished editing and submitted a JFSR article on Deuteronomy 21:10-14 as genocidal rape. I do not know how this happened but somehow my work centers on sexual violence. I say that because in some ways this was never my intention since my interests have always centered around foreign women and their particular place/space in the Hebrew Bible. No surprise, foreign women and girls are subject to particularly problematic social, economic, and gendered circumstances- some of which you can see in the dynamics of Deut 21:10-14. I am currently working on women and warfare and hope to propose a feminist historiography… soon. Time will tell! The Shiloh Project represents some of the best of feminist biblical criticism, and I particularly appreciate the recognition of the ethical responsibility of biblical scholars in their interpretations.

3. How are you bearing up and what’s helping you most?

The two things getting me through this pandemic are community and the government.

I am so privileged to live in the state of Massachusetts during this time. Local organizations are holding food pantries every single day throughout the city’s various neighborhoods so that people do not go hungry. I am a part of a facebook group that is organizing with a local nonprofit around renter’s rights and pushing for our state legislature to pass an eviction moratorium. COVID19 has really highlighted the racial and ethnic disparities in parts of our country in ways I believe many, even Trump supporters, cannot ignore. I think the election of Donald Trump, which was overwhelmingly supported by a white evangelical voting block, is challenging the long held notion here that Republicans are “God’s party.” Instead, this pandemic, and Trump’s decisions, show that the Republicans are a party of Death and Unfettered Capitalism. While those of us in marginalized communities already know personally about these deep disparities, this pandemic is putting those disparities front and center in a way I hope our nation can no longer ignore, even a well-meaning white evangelical. Sadly, the progressive ethos of our state has made us a target of Trump’s during this pandemic.

On an individual scale I am also met with the kindness and real ways people are caring for each other and their neighbors. When I was in quarantine someone paid and picked up my medication so I did not have to leave the apartment. Recently, someone bought me groceries. A friend from my local running group dropped off a home made mask she made and gave me for free. Another friend bought me wine for the month. The generosity is palpable. People are giving how and when they can in a variety of ways. Members of the local neighborhood facebook group are giving away masks, toilet paper, food and offering advice (there are lots of lawyers in Boston!). Needs are being met by individuals just as much as they are being met by our state and local government. Its not perfect, disparities still exist and the statistics of COVID19 deaths in Boston show that, but it gives me hope to be around so many other activists and organizations in la lucha por la justicia.

“I am the Lord’s Servant”: Consent and Bodily Autonomy in Depictions of the Annunciation 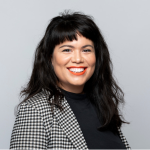